skip to main | skip to sidebar

Attention Film Festival Programmers: If you would like to show 575 Castro St. at your event please send a message to Jenni Olson via her Facebook profile to book an exhibition copy in DVD, BetaSP, DigiBeta or HDCAM format.

575 Castro St. reveals the play of light and shadow upon the walls of the Castro Camera Store set for Gus Van Sant’s film Milk. These mundane shots are almost bereft of movement and sound. So quiet, so still. All the better to showcase the range of emotions evoked by Harvey Milk’s words on the soundtrack. The audio track is an edited down version of the 13-minute audio cassette that Harvey Milk recorded in his camera shop on the evening of Friday, November 18, 1977 (a few weeks after his election to the San Francisco Board of Supervisors which made him one of the first openly gay elected officials in the United States). Labeled simply: “In-Case” the tape was to be played, “in the event of my death by assassination.”

The sensibility of 575 Castro St. hearkens back to the style of the dozens of Super 8 gay short films of the ‘70s that passed through Harvey Milk’s hands to be processed and developed at the Castro Camera Store. The film was commissioned by FilmInFocus.com to be showcased online in conjunction with the theatrical release of Milk.

Check the links over there on the right to find out where else you can see 575 Castro St. at a film festival near you (hopefully). Or just go watch it online right now.

About the Filmmaker:
Jenni Olson is director of e-commerce at WolfeVideo.com and is one of the world's leading experts on LGBT cinema history. Her debut feature film, The Joy of Life world premiered at the 2005 Sundance Film Festival and went on to play a pivotal role in renewing debate about the need for a suicide barrier on the Golden Gate Bridge, as well as garnering praise from critics and audiences for its unique storytelling style.

In 1995 Jenni was one of the founders of PlanetOut.com where she established the massive queer film industry resource, PopcornQ and pioneered the first online showcase for LGBT short films (the PlanetOut Online Cinema), as well as founding the PlanetOut Short Movie Awards in 2000. She is very proud to be co-founder of the Queer Brunch at Sundance; the annual LGBT event she created in 1997 has grown to become the largest queer party at Sundance. As a film collector and archivist Jenni’s historical movie trailer programs (including the ever-popular: Homo Promo, which is now available on DVD) have been shown at film festivals around the world, as have her many short films and videos. In addition to her vast curatorial experience (including stints at the Minneapolis/St. Paul and San Francisco LGBT Film Festivals) Jenni has written extensively about LGBT film since 1985 for publications too numerous to mention. Her wildly entertaining coffee table tome, The Queer Movie Poster Book was a 2005 Lambda Literary Award nominee.

In addition to working on her many other creative endeavors, Jenni loves serving on film festival juries, advising filmmakers on a variety of projects, and serving on the advisory board of Outfest’s Legacy Project for LGBT film preservation. Jenni’s new short film called 575 Castro St. should be coming to a film festival near you in 2009. She is currently in development on an innovative new feature about the Spanish colonization of the State of California as described to you by an erudite butch dyke with the hots for a Hollywood actress which is either called, Get Me Guinevere Turner or The Royal Road.

Voiceover Harvey Milk was the first openly gay man to be elected to public office in the United States. He was assassinated in 1978 and has since been described (by gay writer Andrew Epstein) as, "our Kennedy, our King, our Malcolm X. Our bullet." The audio recording featured in 575 Castro St. is an edited down version of Milk’s original 13-minute audio cassette recorded in his camera shop on the evening of Friday, November 18, 1977 (a few weeks after his election to the San Francisco Board of Supervisors). Labeled simply: “In-Case” the tape was to be played, “in the event of my death by assassination.”

Cinematographer Sophie Constantinou's work has earned international acclaim for tackling difficult topics with artistry and sensitivity. She has produced, directed and photographed several award-winning documentaries, including Divided Loyalties, an intensely personal, feature-length exploration of the conflict in Cyprus (Golden Gate Award, 1999); Between the Lines, about women and self-injury (Golden Gate Award, 1998); and Impact Zone (Best Experimental Film, NY Underground Film Festival, 1997). Specializing in alluring, formally dramatic lighting design as well as improvised observational camerawork, Sophie has been shooting high-profile documentary films for over a decade. Her cinematography credits include HBO’s Unchained Memories, PBS’ Presumed Guilty, and KQED’S Emmy Award winning Home Front. She received her BA in Film Studies from the University of California at Berkeley and a Master’s from San Francisco State University. She teaches cinematography and directing at the City College of San Francisco and has been mentoring at-risk youth in filmmaking and cinematography for much of the past decade. Sophie also shot Jenni Olson’s previous film, The Joy of Life. Find out more about Sophie at her Citizen Film website.

Editor Marc Henrich is a Bay Area-based filmmaker, film teacher, freelance editor and photographer. He has taught editing and film history at UC Berkeley Extension, the Academy of Art, and Film Arts Foundation. His films (The Visit, In the Shadow of Fear, and Unsettled) have been shown at festivals around the world. Marc also edited Jenni Olson’s previous film, The Joy of Life.

Associate Producer Julie Dorf has been doing fundraising in the San Francisco Bay Area since 1989 when she founded the International Gay and Lesbian Human Rights Commission. She has also worked as a fundraiser for the Vanguard Foundation, Horizons Foundation and as a consultant for the Open Society Institute. She is now Senior Advisor at the Council for Global Equality. In 1990 she co-directed the first documentary about gay life in the former Soviet Union, Outcasts in Moscow and St. Petersburg. 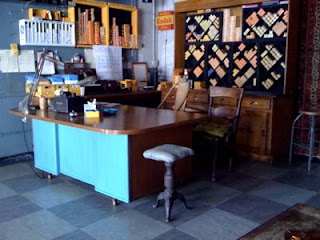 Director’s Statement:
I have been programming, researching, collecting, and writing about lesbian, gay, bisexual and transgender (LGBT) film since 1985 when I founded the Minneapolis/St. Paul LGBT Film Festival. My efforts to promote LGBT film and to help other filmmakers get their work seen have ultimately fed my own desire to make movies. Three primary interests drive my creative work and career: LGBT issues, formal experimentation, and historical documentation. These interests come together in 575 Castro St. which presents an intimate historical portrait of Harvey Milk in his own words, while at the same time capturing for posterity a tremendously significant artifact of LGBT film history: the Castro Camera Store set of Gus Van Sant’s Milk.

The San Francisco Gay Film Festival came into existence in February 1977 when a self-described “ragtag bunch of hippie fag” filmmakers got together and projected their Super8 short films on a bed sheet at San Francisco’s old Gay Community Center. For its first few years the festival showcased the modest Super8 imaginings of such prolific but obscure gay filmmakers as Jim Baker, Bern Boyle, Stephen Iadereste, Ric Mears, Allen McClain, Billy Miggins, T.K. Perkins, Wayne Smolen, David Waggoner, Ken Ward and Christine Wynne as well as festival founders Marc Huestis and Dan Nicoletta and Names Project founder Cleve Jones. Many of these films explored gay themes, but a good percentage of the work (like many other experimental films of the era) focused on simple light and motion studies. The visuals of 575 Castro St. (the play of light and shadow upon the walls of the Castro Camera set for Gus Van Sant’s Milk) hearken back to those gay short films of the ‘70s: The films that passed through Harvey Milk’s hands to be processed and developed. The films that inaugurated an event that would grow to become the largest LGBT film festival on the planet, Frameline: The San Francisco LGBT Film Festival.

One of the first films I got to see when I attended my first Frameline festival in 1989 (looking for films to curate for my queer film series in Minneapolis) was Warren Sonbert’s Friendly Witness. That same year I also got to see my first queer experimental works by filmmakers like Su Friedrich, Abigail Child, Barbara Hammer and Ulrike Ottinger.  These are the cinematic visions that have shaped and sparked my own vision — first as a curator, and then as a filmmaker myself. It is fitting that the style of 575 Castro St. should match the style of the pioneering gay films that Harvey Milk helped to develop (in all the meanings of that word).

Perceptually and spiritually, my work challenges viewers to slow down and pay attention to the moment and to the world around them, drawing attention to the beauty of what might–at first glance–appear mundane, but is in fact a rich tapestry of architecture, light and shadow, and ephemeral history. For me, the joy of my films is found in the poetry of the static image — in the experience of time passing on film, undistracted by plot, actors, dialogue and other narrative conventions. An internal drama is evoked in the sensitivities of each viewer who is open to the subtleties of these mundane shots that are almost bereft of movement and sound. So quiet, so still. All the better to showcase the range of emotions evoked by Harvey Milk’s words.

Wow. And to think we just elected a gay mayor, and no one cares that he's gay. We just know he's a city commissioner who is good at public discourse, public policy, and cares about this city. I think Harvey Milk helped bring our fair city this reality, but changing nationally the public's opinion on gay rights.

Jenni Olson
A leading figure in the LGBT film world, Jenni Olson has been making connections between queer films and the audiences who need to see them for more than 30 years. She is one of the world's leading experts on LGBT cinema history and was also one of the founders of PlanetOut.com. She is currently an independent consultant. Jenni is also an acclaimed writer and filmmaker — her latest film project is The Royal Road. Follow Jenni on Facebook or Twitter for updates. To read even more biographical details, please click here.

What Else About Jenni Olson

Where To See This Film